I'm talking primarily about those who tout traditional religion-based reincarnation, whether the personal soul version of much of Hinduism and Jainism, or the impersonal life force version of Buddhism.

I'm not talking about the New Ager distortionists who believe all their past lives were as the king, queen, or mighty warrior, because they're wrong even within the world of reincarnation.

Anyway, the actual reincarnation world of Hindus, Jains and Buddhists says you may come back not as the  king or queen, but as the peasant shoveling shit out of the king's stables, or, much more importantly for this, a dung beetle in that shit in the stable.

We have, a la ideas explored by and generated from Thomas Nagel's famous, or infamous, "What Is It Like to be a Bat," (text here) a mind-mapping problem. This is more a problem for the personal soul type of reincarnation; obviously, an impersonal life force doesn't have human personal soul characteristics. Whether early Buddhists thought of this as a way to explain, or explain away, this issue, I don't know.

Anyway, Nagel argued that we can't understand bat consciousness because of its subjectivity and its different sensory basis, and went from there.

Well, except for Hindus and Jains, many people, whether of professional biological bent or not, would have difficulty extending consciousness at all to a beetle. Plus, the difference between its sensory interactions with the world and ours is orders of magnitude different from the human-bat difference.

So, if karma is an iron law of rewards and punishments, beyond the well known difficulties with people (if we're all being reincarnated) not remembering past lives, how can it even be a punishment to be reincarnated as a beetle? How can the "beetle-self" feel punished? Since as far as we know, beetles don't have emotions, period, along with not having consciousness, how can they feel anything, as in feeling as emotional affect and not sensory input?

This has a flip side. If, especially if you're a Jain who takes consciousness of some sort down to what most of us would call inanimate objects, what if a, say, an ameba is being rewarded by getting promoted UP to being a beetle for being an incredible ethical and altruistic ameba?

Does that sound as silly to you reading it as it did to me, typing it?

That leads to what I see as the even larger problem. (Yep, the above is the lesser problem.) And this one hits the Buddhist types as well.

While Charles Darwin wasn't around 2,500 or more years ago, nonetheless, these ideas of reincarnation and the karma behind them seem based on a "progress" misunderstanding of evolution, and of biology in general. 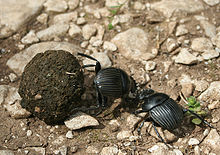 Who says it's "worse"being a beetle than a shoveler of the king's shit or even the king? I suppose a "good Buddhist" might use this as a wedge to claim that the whole idea of karma is itself maybe maya, but in that case, he or she is already lighting the fuse on their own petard. From that, they're making themselves even more irrelevant to the discussion.

So, we move forward. Given that the planet would soon be run over with shit, if we had no dung beetles, whereas the world might be quite good had we no more Homo sapiens, if I were to engage a progress-based version of zoology, I'd argue the dung beetle is superior. (And, we haven't even talked about the myth of cockroaches surviving nuclear war.)

That's bad enough. Let's take it inside the human world.

Here, of course, the claim is that being the shoveler of the king's shit is worse than being the king.

Says who? Per the French Revolution, we could stand to get rid of yet more kings. Per the labor theory of value, the shoveler of the king's shit is more important whether the king is alive or shat mat.

In other words, karma and reincarnation, taken as a unit, are ultimately part of the classism of the Hindu caste system. And, as I see it, here, Buddhism talking about only an impersonal life force being reincarnated is still a Social Darwinist failure too. It still based karmic reincarnation cycles on the idea that some humans are, by group sociological observations, superior to others.

On the third hand, the British Raj intensified and codified the caste system, as part of the old divida et impera.
Posted by Gadfly at 8:04 PM