The traditional answer ever since the middle of the 1700s, per David Hume on the is ≠ ought problem, is a semi-clear to clear no.

I remain unconvinced, and told Massimo so, including telling him that I thought she was practicing "discourse ethics."

At a minimum, the claim that it's "super easy, barely an inconvenience," as Philosophy Now says, is laughable.

Per the top link, Hume himself, didn't always dodge this bullet. But, I would argue that, first, this might be a case of Emerson's foolish consistency. I would also argue, as the link notes, that Moore and others took similar stances.

Foot is a moral realist as part of being a virtue ethicist. I'm not a moral anti-realist, but I'm not planted in the moral realism camp. I'm really some kind of moral skeptic, but one who rejects moral error theory. I'm probably more a non-cognitivist, then a Pyrrhonic moral skeptic second. I think Hume, today, with his famous statement on the passions, might see himself as a non-cognitivist, calling moral statements emotional ones in many cases.

Or, like Massimo himself, as I blogged about a year ago (that's maybe a sound of a petard you hear, Massimo), I'm a moral naturalist, who, if you want to use other labels, is a moral non-realist, or a person who "mu's" moral realism. But, it's not totally the sound of a petard hoisting, not there.

And, I'm an eclecticist on schools of moral thought; I have some ideas that square more with utilitarianism, while not being fully planted there, either.

I think the criticisms of moral realism in the last paragraph of that Wiki link are cogent. Other than a few clear moral stances such as "do not murder," why are there multiple, not just two, but three, five or seven, different stances on many moral issues if moral facts exist? And, since Foot herself invented the trolley problem, and people's thoughts on this run a broad spectrum, and there's a different broad spectrum when one actually has them do this in a virtual reality machine, we're at least halfway into petard-hoisting right now.

Massimo seems to try to avoid the petard when he says he's a moral non-realist but not anti-realist. He then calls himself a moral naturalist.

The evolution of ethics along with human psychology is also of note. Plus, moral realism doesn't seem to leave room for cultural evolution. In fact, if we substitute "Mother Nature" for Kant's god, it risks running into a deontology brick wall. And, here, I think that includes Massimo. And the petard. That said, humans' ability to evolve culturally is itself ultimately a naturalistic artifact, so Massimo may be back off the petard, especially as he stresses the importance of cultural evolution elsewhere. But ... I don't really think that's in his moral naturalism stance.

I think, if Hume were alive today, he'd look at the behavioral economics of Amos Tversky, Daniel Kahneman, Dan Ariely, et al, and build on his empirical background to articulate a parallel theory of "behavioral ethics." Just as they challenged the idea that we are rational economic actors, I think he'd use similar modern behavioral studies to challenge the idea that we are rational moral actors, which virtue ethicisists essentially claim we are.

He, good philosopher that he was in many ways, wouldn't confine that within psychology, though.
Posted by Gadfly at 11:32 AM No comments: Links to this post

Late-life Monet in Fort Worth

It's not your mother's Claude Monet on display at the Kimball Art Museum in Fort Worth. And, you've got only until mid-September to enjoy a magnificent display of late-life Monet works.

Fortunately, besides what's on its website, the Kimball, for the first time in my recollection, allowed photography of a special exhibition. 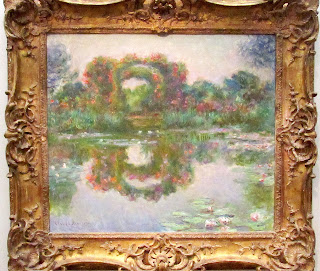 And, so you can see, what you see at left is not totally your mother's Monet.

But that is a relatively early example of his transition beyond his mid-life water lilies.

It's still halfway your mother's Monet. 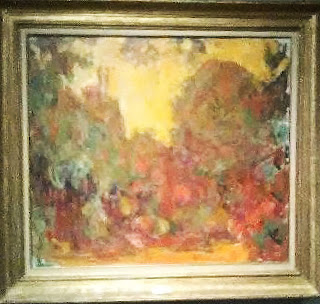 This, on the other hand? Is more definitely not your mother's Monet. This is after growth with cataracts had taken much of his vision, but it was completed in the year he had surgery, followed by special glasses lenses, that partially restored it.

You can see he's starting to swap out "normal" colors, as the scene isn't totally that red.

But that one is nothing.

He went more that way, with the pergola over his Chinese bridge made famous in older paintings. 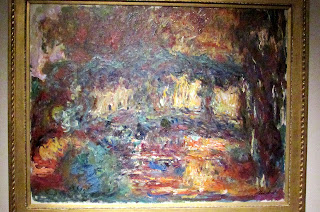 That's not your mother's Monet at all.

The display boards in this area of the exhibit, which has more than 50 paintings, many not seen in the United States before, said that it were as if he was moving in the direction of abstract expressionism.

It said this near a final pair of paintings of a weeping willow that he studied in late life as much as his Chinese bridge. 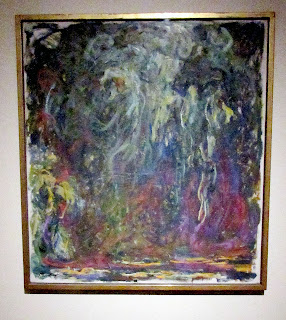 This is definitely not your mother's Monet.

And, yes, that's a weeping willow.

If you're anywhere near Fort Worth between now and mid-September, head to the Kimball.
Posted by Gadfly at 12:53 PM No comments: Links to this post

Email ThisBlogThis!Share to TwitterShare to FacebookShare to Pinterest
Labels: painting

For some newspaper work recently, I needed to find a bulletin from one of the local Catholic churches.

I did so, online.

And was jarred into something I hadn't seen in several years.

Advertising on a church bulletin.

I'm not sure why Catholics do this in general, let alone so much. (This bulletin, on 8 pages, had one that was all ads, and a second that was just about so. Most of them not huge, but rather, a church bulletin equivalent of newspaper "sig page" ads.)

Anyway, they do do it; I've seen it in Catholic bulletins elsewhere. It had just been a while for me to have seen it.

So, the "why" in general has several parts.

First, why do they do it and Protestants don't?

This, in turn, has two parts.

One is, IMO, because there are many Protestant churches but only one Catholic one. So, less competition to get ads.

In turn, advertisers of non-Catholic owned businesses may think the same way.

Another may be church finance related.

Catholic churches generally ask members as part of stewardship to pledge a specific amount each year. WHY a parishioner chooses a certain dollar amount is on their religious conscience; Catholics, like mainline Protestants, preach stewardship and not a literal tithe. That said, a Catholic business owner may prorate their company's ads in a church bulletin as part of that tithe.

Related to that, this may be, for Catholic business owners seeing a captive audience, a Catholic version of fundamentalist type Protestants putting the fish symbol on their outside-world ads, etc. But, Catholics, per the one church vs many churches, don't have to do that. So, those two whys tie together.

There's a second "why," though, that's also versus Protestants — and perhaps vs the Orthodox, where, in most places in America where there is an Orthodox presence, it's usually limited to just OCA or else one of the nationalist Orthodox churches, meaning they could pull it off, but I've not seen it, at least ransacking my memory.

That's a more theology-related why.

Narrowly speaking, this is an adiophoron, but ....

It treds close to the line, of this secularist former Lutheran, of trying to worship both God and Mammon. At a minimum, it feels religiously distasteful to pop open a church bulletin and see a bunch of ads.

Were I still religious, the distastefulness would be of a sort to challenge my spirituality.

But, it's clearly entrenched in American Catholicism.

Of European Catholicism, I have no idea. I've been to the Continent once, and to a few churches, including one cathedral, but I didn't go around looking to glom on to bulletins.
Posted by Gadfly at 1:36 PM No comments: Links to this post